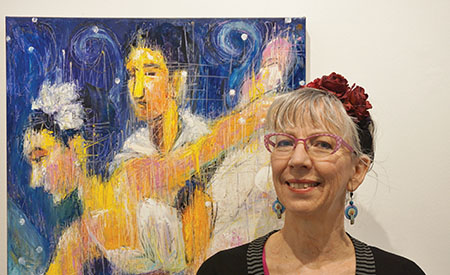 Posted by: The Local Weekly January 18, 2017 in Arts & Entertainment Leave a comment

“It’s about people and personalities,” says Paula O’Brien, curator of Westcoast Figurative, of the current exhibition running at the Gibsons Public Art Gallery. She would know, being something of a personality herself. The self-described sewing queen and snappy dresser has been an artist for 34 years, 28 of those based in her colourful little house in Gibsons. O’Brien got her start in textiles as both her parents were fashion designers. “I got a sewing machine for my 16th birthday,” she says. “And I’ve been carrying it around ever since.” After studying fine art in Montreal, O’Brien did a two year stint at Goldsmith College in London studying embroidery as a fine art medium. Throw in sailing adventures in the Mediterranean and along Mexico, operating unique business ventures on different continents, all while raising a family, and that is one well-travelled machine. “It’s easier to pick up and put down a textile project than a painting project,” claims O’Brien. 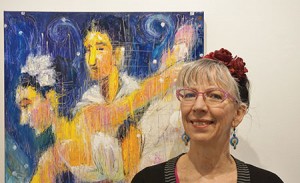 Paula O’Brien poses in front of one of her works titled, “Snow Queen and Cavalier” (from The Nutcracker), an oil on canvas. She is the curator, and one of seven artists showing their work with the human form at the Gibsons Public Art Gallery. Anna Nobile photo

O’Brien used the marketing and database skills she picked up while running her businesses to create sunshinecoastartists.org, a database of Sunshine Coast artists working in various mediums and styles. “It was about sharing and networking,” O’Brien says of her motivation to start the site. She’s also responsible for figurativeartist.org featuring over 1,000 artists from around the world that use art to explore the human form. “It’s more juried and qualified than the Sunshine Coast artist database which includes everyone,” explains O’Brien, with both sites open to new submissions.

In 2007, with her latest business winding down and her two boys grown, O’ Brien found she had more time for creating art. “I started going to life drawing [at the Arts Centre] in Sechelt just to have a drawing practise again and a lightning bolt went off,” she says. “I found working from direct observation, as opposed to imagination or from photographs, so compelling.” With Westcoast Figurative, O’Brien invited artists whose work she admired and those she’d worked with before to exhibit with her in a show focussed on the human body. The seven artists have produced a diverse show of 67 pieces. “[We’ve] tried to convey and capture and share with others some connection that [we] have with the subject.” O’Brien’s connection with the Coast’s dance community is evident in her bold and colourful paintings. “It’s blurring, its moving, its reflected light, intensified,” says O’Brien . “That’s how I am understanding what they are experiencing and they’ve said to me, ‘That’s what it feels like.’”