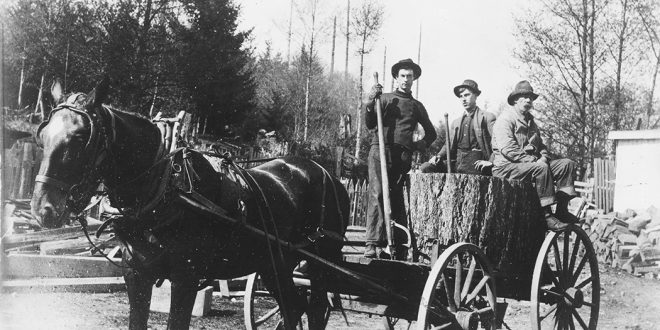 What is a peavey?

Posted by: The Local Weekly March 20, 2019 in Local Community Leave a comment 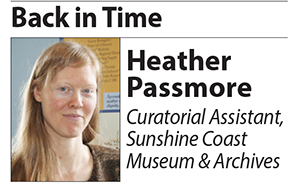 Among the early settler tool collection at the Sunshine Coast Museum and Archives, there is an important implement that looks both especially familiar and exceptionally well-used. This peavey, with its hook, spike, and hand-made wooden handle was used to clear land by Gibsons pioneer Alfred Wyngaert. Early settlers and loggers on the Sunshine Coast used the peavey to roll and pry timber on land and water. Its design has remained unchanged since 1858 when American blacksmith, Joseph Peavey, refined a tool called the cant hook or ‘swing dingle’. The peavey as we know it was an instant and enduring success and all loggers have used it since.

The implement has a wooden handle about 4-5 feet long, an iron spike protruding from the bottom end and a curved iron hook attached partway up by a pivot. Along with the point, this hook grabs the log at a second location to enable the prying and rolling of logs. The pivoting hook accommodates different sized logs and moves out of the way when applying leverage. Of course, the best way to understand a peavey is to use one and I was surprised with the relative ease with which even I could turn a large log at the beach. 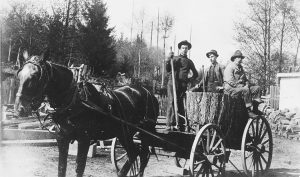 This 1913 photo shows Hector McCall, left, holding a peavey, with his father Arthur seated and Wilbur Hicks behind. On the wagon is a “meat block”, cut from a large log and on its way to L.S. Jackson’s butcher shop near the wharf in Gibsons Landing. Vancouver Archives photo

Local log salvager, Erik Hammond explains how valuable the peavey remains in his trade on the water. “I use it to roll logs, the point can be used for manipulating chains, and the hook can even be used as a lever to tighten them up”. Innovations such as an aluminum version with a thick cedar handle intended to float “just never caught on” he explains. Older may be better in this case, as handles made of old growth wood are less likely to break – an important consideration when prying a log up.

Given its power to move timber, I wondered…could the peavey have been used by early loggers to stack smaller-sized logs for transport? Many photographs of the era depict loggers leaning proudly against their peaveys beside an immense tower of logs. I had the privilege to put the question to 93-year-old Gibsons resident, Bob Alsager, who started logging back in 1941. The answer, essentially is no. His father, Eric Alsager, was also a logger and in his father’s time logs were stacked up using horse-drawn power in an ingenious method called parbuckling. But that is a story for another article…