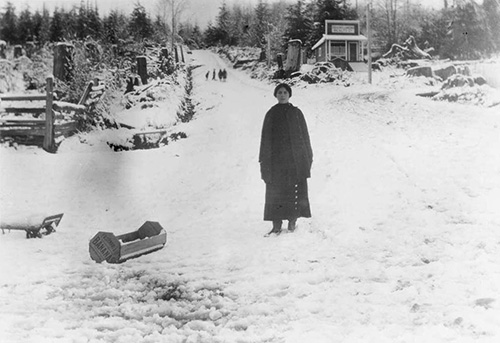 Winters past brought to mind

Posted by: The Local Weekly November 15, 2017 in Local Community Leave a comment

Inspired by the snow lazily falling outside my office window and the gusts of cold air blowing in the door with each visitor to the museum, I decided to research what life was like in the winter for early European settlers on the Sunshine Coast.

In the early days, before there were easily accessible roads on the Coast, all travel between communities and deliveries of supplies and mail were done by boat. According to Francis Wyngaert, author of “The West Howe Sound Story: 1886-1976”, boat services at the turn of the century from the Howe Sound Wharf to and from Vancouver were virtually without a schedule, and passengers could wait for up to three hours for their steamer to arrive. In the winter, George Gibson Sr. would light his lantern in the evenings and investigate who was still waiting on the wharf for their ship. Those there would be invited into the warmth of Gibson’s home, near the wharf entrance, where they would be provided with food and warm drinks by Mrs. Charlotte Gibson. 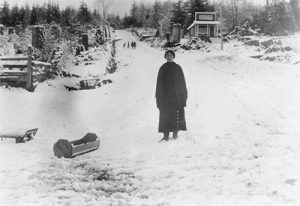 Gibsons Landing in the winter of 1910: Myrtle Armour (later Mrs. John Hicks) is seen standing in the snow at the bottom of School Road, the only road up the hill at the time. This spot would later become the main intersection in Lower Gibsons. SCMA Photo #948

Winter storms on the Coast were an impediment to ship travel. For example, in Roberts Creek in the early 1900s, the storms made landing ships challenging, and often caused the destruction or un-anchoring of the off-shore floats. Winter storms could also delay postal pick-up from the Howe Sound Post Office, where mail could sit for days waiting for a steamer. Wyngaert mentions that when this happened, the postmistress, Mrs. Emma Fletcher, would send it to Vancouver on a tugboat or on a local resident’s fishing boat.

For the early Finnish communities on the Coast, winter was the time for women to make essential items needed for the home and for men to repair items such as animal harnesses and tools.

Winters were also a time for friends to come together for dancing and fun. For example, in the 1920s the Winegarden family held many Saturday evening dances for the young people of the community, where they would dance the two-step, waltz, and quadrille.

This is just a glimpse into the lives of early settlers on the Coast, a different time, with its own winter challenges and gaieties.